We use live-cell experiments and mathematical models to understand how single cells process information in inflammatory diseases and cancer.

To decide between irreversible cell fates such as growth, differentiation, or death, each cell processes information about its environment using a network of molecular circuits called ‘signaling pathways’. The output of these signaling pathways often initiate gene transcription, eventually encoding proteins that alter the cell’s biochemical state. Our research combines principles of systems, synthetic, and computational biology to understand how information flows through these signaling pathways. By observing input-output relationships in the same cell using microfluidics, live-cell dynamics, and single-molecule microscopy, we aim to decode the signaling ‘language’ and develop mathematical models of information flow with single-cell resolution. Our ultimate goal is to understand how variability of behaviors at the level of single cells lead to healthy and diseased population-level responses, and to rationally manipulate these behaviors with targeted perturbations.

A quantitative single-cell perspective of signaling:

While cells of a clonal population ostensibly express the same components of a signaling network, subtle differences between cells in the abundance or activity of signaling molecules can lead otherwise identical cells to distinct fates. Using real-time microscopy technologies, and genetically modified cells that express fluorescent biosensors, we track the activity of different signaling pathway components over time and associate these with downstream responses in the same cell. For examples, see Lee et al. and Cruz, Mokashi et al. Properties of single cells are quantified with computer vision and bioimage informatics tools, and used to parameterize mechanistic models of biochemical networks that govern single-cell responses. These quantitative relationships that link ‘input’ and ‘output’ in the same cell often reveal non-intuitive mechanisms of signal transduction that regulate cell fate decisions. These mechanisms are also prime targets for chemical perturbations, for example see Pabon, Zhang et al. 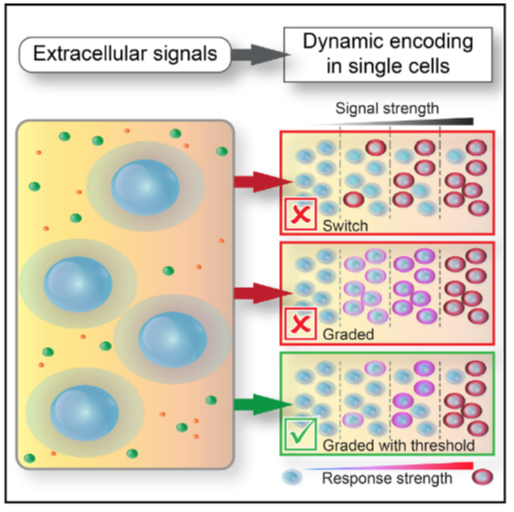 Sources of noise make biological systems appear unpredictable at the level of single cells, but that doesn’t mean that cells are unreliable. Despite cell-to-cell heterogeneity we find that single cells can grade multiple levels of responses to cytokines over a range of doses. Through accounting for heterogeneity in cell states, the information transmission capacity of a single cell can be measured and we are exploring how variability between cells in their capacity to transmit information affect cell fate decisions, either cell autonomous or through cell-cell communication. Using models and single-cell data, we aim to determine whether various sources of biological noise can expand or limit information transmission capabilities in various sub-populations of cells. See Zhang, Gupta, et al. and Cruz, Mokashi, et al. for more detailed discussion.

Transcriptional diversity through competition on promoters:

When bound to promoters or enhancers, DNA-binding proteins can either activate or repress transcription of nearby genes. During inflammation or in response to a drug, activator and repressor proteins can compete to occupy the same DNA region and their interplay determines whether the associated gene is transcribed. While competition for DNA promoters is generally thought to limit transcription, our work with NF-kB family transcription factors has led to the tantalizing suggestion that competition can diversify transcriptional responses to cues in the cellular milieu. Depending on the relative abundance of activator and repressor proteins in a cell, and their respective affinity for a promoter DNA sequence, distinct classes of transcription emerge – in the same cell, 100’s of NF-kB regulated genes can be transcribed uniquely even though their transcription is regulated by the same proteins. See Lee et al. for more description. One of our goals is to understand how the expression of system-specific competitors ‘fine-tune’ transcription, and how variability in the abundance of activator and repressor proteins between single cells affect their response. By integrating experimental and computational techniques, we aim to quantify and model competition-dependent transcription with single-cell resolution. 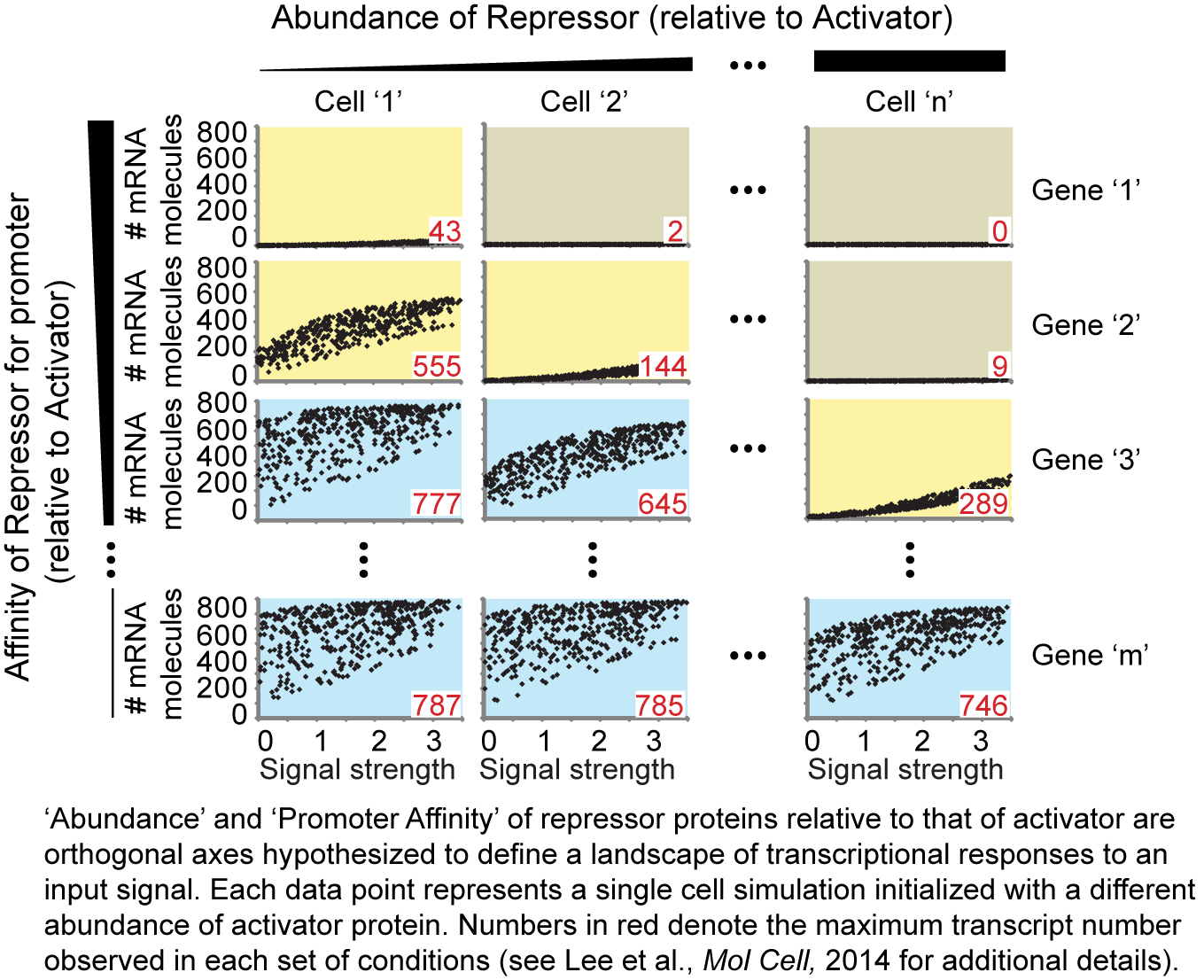 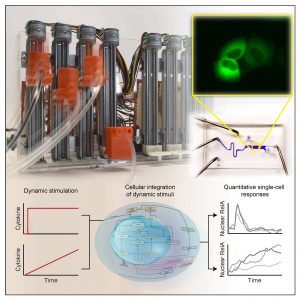 The Greek philosopher Heraclitus asserted “Panta rhei”, that everything is continuously changing. This is especially true for the microenvironment of cells in vivo, yet most studies in lab environments are surprisingly static – exposing monoclonal cells to a single unchanging stimulus over an experiment’s duration. The capabilities and limitations of cells are underestimated in the ‘static view’ of the cell, leaving hidden a dimension of therapeutic opportunities that can only be revealed in time-varying microenvironments. To address this challenge, we are developing a modular system of robot-controlled microfluidic cell culture chips to control dynamic properties of the cell microenvironment. For example, see Mokashi, Schipper, et al. We are particularly interested in understanding and modeling how single cells share information between different cell types in co-cultures and 3-dimensional cellular structures.