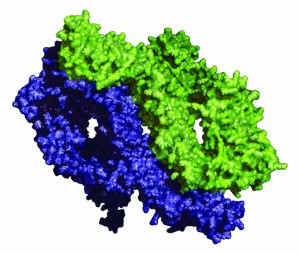 Nathan Clark and his lab are looking at connections between what we think of as different diseases and how these connections can help lead to innovations in treatment of those diseases.

“By analyzing present-day genomic sequences through their relations to one another—in 33 different mammals, from elephants to platypuses to humans—Clark can infer the historical picture and pinpoint areas where genes show signs of rapid evolution. The degree to which these hot spots match across the animal kingdom is measured using something called ERC, or the “evolutionary rate covariation.”

For instance, if genes related to a particular function, say, color vision, are evolving at a similar rate between two species, then their ERC score would be quite high. Likewise, a high ERC score across a collection of related animals implies that they are all responding to a similar evolutionary pressure.

It may seem counterintuitive that species that are seemingly so different from us might provide insight into human diseases, but it is easy to forget how similar we are on the molecular level. “The genes that form a retina in a mouse are the same as the ones that form a retina in a kangaroo,” reminds Clark. And by evaluating the co-evolutionary signatures of genes related to these areas, we might be able to zero in on the individual genes or groups of genes that contribute to, say, retinal disease.

In a paper published in the February issue of PLOS Genetics, Clark and MD/PhD student Nolan Priedigkeit used these signatures to show that there are some surprising evolutionary connections between what we think of as separate diseases.”